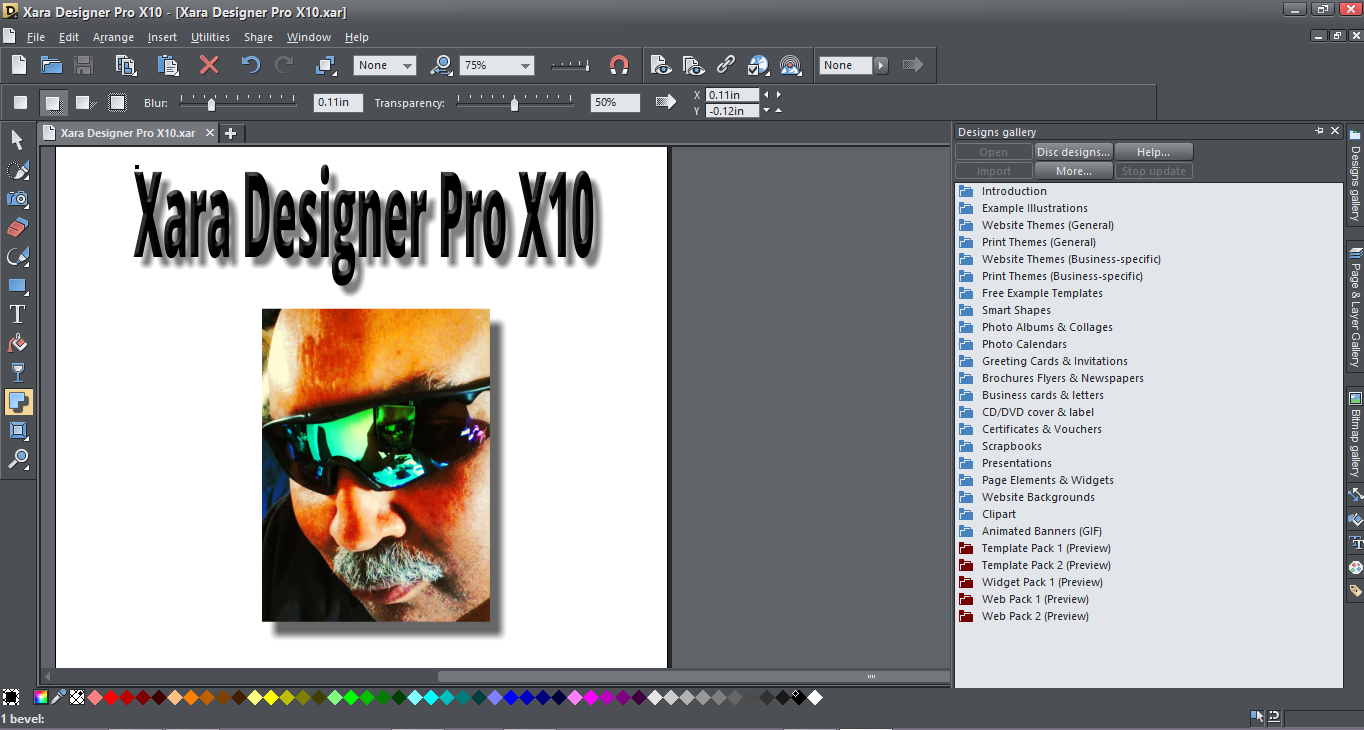 I recently took a look at Xara's most recent drawing and graphics applications: their flagship Designer Pro X10 ($299) and its less full-featured cousin, Xara Photo & Graphic Designer 10 ($89.99).  These applications have been designed from the ground up to be cutting-edge tools for drawing, compositing and basic photo editing.  They have a rich heritage, as the first iteration of Xara appeared circa 1995.  I have been an ardent user from the very beginning and have watched the platform become more powerful, year after year.

Formerly, Xara released a single application that was primarily a drawing and compositing tool.  In recent years, they have expanded Xara into a number of specialized tools including Web Designer, Web Designer Premium, Photo & Graphic Designer, Page and Layout Designer and Designer Pro. This approach allows you to select the best tool for the task and also saves you money if you are on a tight budget.

If you are a graphics professional who is looking for a versatile tool to handle all of these tasks, then Designer Pro X10 is the tool for you.  If you are are just doing drawing, compositing and photo editing and are watching your pennies, then take a look at Photo & Graphic Designer.

New features that are common to both programs include:

When comparing Designer Pro X10 and Photo & Graphic Designer 10, the programs look identical at first glance.  However, if you dig a bit deeper, you will discover that Pro also has all of the features of Xara Web Designer 10 Premium, a program I reviewed previously here.  In addition Designer Pro includes more professional design features, more complete photo editing capabilities and 64-bit and multi-core processor support.  A useful comparison chart is available here: http://www.xara.com/us/page-layout-designer/compare/

These programs both really shine when it comes to speed and ease of execution.  They allow you to spend your time designing rather than fumbling with a program that is dense and difficult to use.  You can do in seconds what usually requires several minutes in similar applications.

If you have used any of the previous versions of the program, you will feel right at home with the latest versions.  Xara's programs are very easy to navigate with plenty of pull-down menus and galleries on the right side of the UI.  And if you find yourself getting stuck, there is a great help menu system with movies, a forum and plenty of online resources.

Bottom line: If you are a graphic designer, photographer or web designer and are looking for a powerful and easy-to-use tool, look no further than Xara!

A better question might be, who is Tony Thomas and why did he create this web site? Well, I have been a professional writer for more than 30 years. In 1978, I started as audio editor for SCENE Magazine in Cleveland, OH, a post I held at two different times over a two decade period. In the 80s and 90s, my articles and reviews appeared in numerous publications including Scene, Recording, Mix, AV/Video, Roland Users Group, Millimeter, Recording Engineer and Producer, Transoniq Hacker and others. I was also the Technology Expert on the WERE morning show in the early 90s.

In the world of technology, something new is happening every nanosecond. As a writer, one of my biggest frustrations is the length of time it takes for my articles to see the light of day. By the time my work hits the stands, it is often weeks or months out of date. With the emergence of the Internet, there is a unique opportunity to promulgate information instantaneously to a worldwide audience. Because of that, I feel that it is a wonderful forum to impart news, views and reviews of new and emerging technologies with the immediacy that print can never duplicate.

Some of my interests include music, computers, digital audio, photography, graphic design and electronics. Here, I'll attempt to give you the freshest scoop on products and trends that I find enlightening and revolutionary. I hope you enjoy it and welcome your feedback!

Support Techtrends on Patreon and Paypal!

Any amount (even $1) would be greatly appreciated!
Patreon:
www.patreon.com/tony10000
Paypal: www.paypal.com
Send support to: tonythomas-at-tonythomas.net

As an Amazon Associate, I earn from qualifying purchases.